Recently I got a Macbook Pro (model A1990) along with few other items including a USB 10-in-1 hub (EAUSOO model ES-HB003C).  All was well except for one particular vexing issue i.e., once a while computer would stop communicating with wifi router. If I am using browser it would take very long or timeout or running command line utilities that used network would fail.  Many a time the network speed would drop by 90% or more! Initially, without a clue on what was happening, I tried different things including (a) suspecting some application hogging the bandwidth, (b) other devices doing something similar, (c)  relative position of my Mac with a Wifi extender (TP-Link) which I was using with 2.4GHz band and (d) few other things.

It turned out to be the issue with USB hub.  Though some have experienced similar problem with latest (2017 or later) Macs it is somewhat rare.  There is a forum thread where many have expressed frustration with this problem and possible solutions.  For more details see https://discussions.apple.com/thread/8511706.

Since latest Macs are equipped only with usb-c ports for many of external devices one has to use hubs to connect monitors, flash drives, head phones, etc.  The setup would look very similar to one shown below in Intel paper.  And not able to connect them while using wifi became a blocker for me to use this new computer.  Interestingly,  in my case the issue was worse when I connected the hub to the right side ports while left side ports also did poorly.

Setup: Macbook computer and devices were nearly 25 feet away from the router.  Normally my work area is much further from router and I use wifi extender sometime. For the following scenarios I disconnected the extender and the packets would hop directly between the Mac and the router.

Following results were for Komakaer 9-in-1 hub and are worse than the above results.

As early as 2012 Intel published a paper detailing the interference caused with USB 3.0 connectors.  To mitigate the interference as suggested in the article, I used tinfoil shield (See below) on the hub but it made no difference. 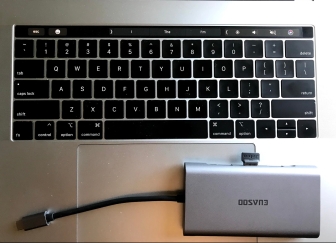 Another option was to use different frequency or band.  With U-verse router capable of handling dual band I turned-on the 5G and reran the experiments with much better results.  Connecting hubs to the computer had no effect on the wifi.

At this point I plan on using 5G band only for Macs and 2.4G for phones and few other devices including chromecast and smart TVs.   Later I may have to try out few things with available channels on the bands as well as their effect on (distance) range.